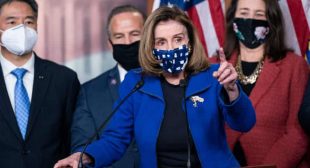 House Speaker Nancy Pelosi said on Monday that the US Congress will establish an outside, independent commission to review the “facts and causes” related to the deadly 6 January insurrection at the US Capitol by supporters of Donald Trump in the waning days of his presidency.

Pelosi said in a letter to members of Congress that the commission would be modeled on a similar one convened after the 11 September 2001, terrorist attack on Washington and New York.