‘Neoliberal proto-fascism’: Noam Chomsky explains how Trumpism has made the GOP a ‘white supremacist’ cult 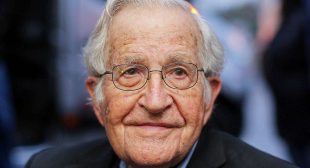 “The fascist symptoms are there, including extreme racism, violence, worship of the leader — sent by God, according to former Secretary of State Mike Pompeo — immersion in a world of ‘alternative facts’ and a frenzy of irrationality,” Chomsky warned. “Also in other ways, such as the extraordinary efforts in Republican-run states to suppress teaching in schools that doesn’t conform to their White supremacist doctrines.”