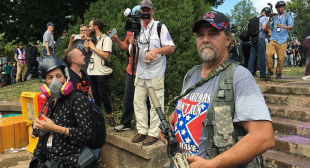 Days before the Easter holiday, the Huntington Beach Police Department received intel about fliers promoting an upcoming Ku Klux Klan (KKK) event which led to an initial investigation. A photo of one of the flyers, which reportedly featured a klansman with a burning cross, included information about an event later that evening.

The flyer’s headline message read, “Say no to cultural genocide.” However, the website and contact information were excluded.