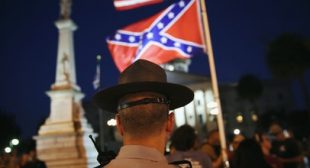 THE FBI HAS long been concerned about the infiltration of law enforcement by white supremacist groups and its impact on police abuse and tolerance of racism, the unredacted version of a previously circulated document reveals.

The FBI threat assessment report was released by Rep. Jamie Raskin, chair of the House Committee on Oversight and Reform’s Civil Rights and Civil Liberties Subcommittee, ahead of a hearing about the white supremacist infiltration of local police departments scheduled for Tuesday.

A heavily redacted version of the 2006 document had previously been published, one of a handful of documents revealing federal officials’ growing concern with white supremacists’ “historical” interest in “infiltrating law enforcement communities or recruiting law enforcement personnel.” A different internal document obtained by The Intercept in 2017 had also noted that “domestic terrorism investigations focused on militia extremists, white supremacist extremists, and sovereign citizen extremists often have identified active links to law enforcement officers.”

The unredacted version of the first document sheds further light on the FBI’s concerns, as early as 2006, about “self-initiated efforts by individuals, particularly among those already within law enforcement ranks, to volunteer their professional resources to white supremacist causes with which they sympathize.”