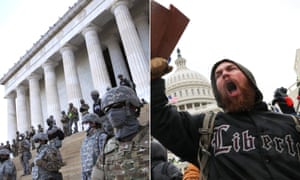 The contrast between the law enforcement reaction to the storming of the Capitol on Wednesday and the suppression of peaceful protests in the summer is not just stark – it is black and white.

The Black Lives Matter demonstrators crowd outside the White House on 1 June was a block away from the building and made no attempt to breach its security. It was a mostly Black crowd, and it was charged by a force made up of Washington police, US Park police, over 5,000 national guard troops and federal agencies like the bureau of prisons. An army helicopter swooped low over the heads of the protesters. Teargas, batons and horses were used to clear a block so that Donald Trump could stage a photo op outside a church across the road. A national guard commander later admitted there had been “excessive use of force”.