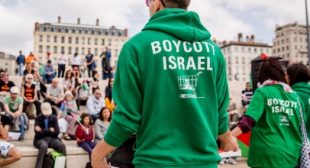 Hate speech restrictions are used in European countries to suppress, outlaw, and punish more than far-right bigotry. Those laws have frequently been used to constrain and sanction a wide range of political views that many left-wing censorship advocates would never dream could be deemed “hateful,” and even against opinions which many of them likely share.

France is probably the most extreme case of hate speech laws being abused in this manner. In 2015, France’s highest court upheld the criminal conviction of 12 pro-Palestinian activists for violating restrictions against hate speech. Their crime? Wearing T-shirts that advocated a boycott of Israel — “Long live Palestine, boycott Israel,” the shirts read — which, the court ruled, violated French law that “prescribes imprisonment or a fine of up to $50,000 for parties that ‘provoke discrimination, hatred or violence toward a person or group of people on grounds of their origin, their belonging or their not belonging to an ethnic group, a nation, a race or a certain religion.’”