Bernie Sanders released a plan to legalize marijuana (at 4:20 pm) 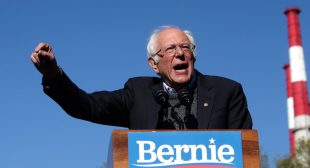 The proposal is among the most ambitious from one of the Democratic presidential candidates. It would move to legalize marijuana within 100 days through executive action. But it would also address the potential downsides and criticisms of how several states have legalized marijuana so far — by trying to limit the size and scope of the marijuana industry and taking several steps to ensure that communities of color benefit from legalization while potential bad actors, such as tobacco companies, do not.