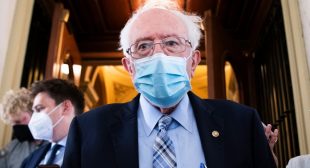 Anticipating a clash with conservative Democrats over the price tag of the party’s emerging reconciliation package, Sen. Bernie Sanders on Thursday laid down a clear marker: the $3.5 trillion in spending outlined in a newly approved budget resolution is already the compromise, and anything less won’t cut it.

“I already negotiated. The truth is we need more,” Sanders (I-Vt.), chair of the Senate Budget Committee and chief architect of the reconciliation blueprint, told Politico in an interview published Thursday.