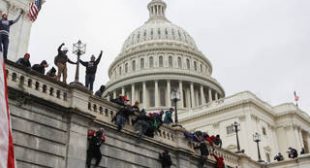 Democrats in Congress are pushing ahead with impeachment following the violent insurrection that killed five people at the U.S. Capitol on January 6. The single article of impeachment against President Trump cites his incitement of insurrection and accuses him of subverting and obstructing the certification of the 2020 election. This comes as authorities are warning of more right-wing violence around Joe Biden inauguration on January 20, with possible armed far-right protests planned at all 50 state capitols as well as the U.S. Capitol.

We speak with Walden Bello, an acclaimed sociologist, academic, environmentalist and activist, whose latest column argues the United States has entered a Weimar Era, in which democratic elections are increasingly delegitimized as street violence becomes the norm. This is not something thats unusual that has happened in the Capitol. Right-wing groups, when they begin to lose electorally, they resort to the streets and to violence in order to stop that process,â says Bello.