‘She-Wees’ and Plastic Bags: Amazon’s Pee Scandal Is Much Worse for Women 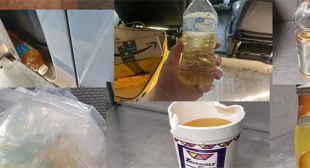 Last week, as part of a public relations attempt to combat negative media coverage amid a high-stakes union election at an Amazon warehouse in Alabama, the company’s official “Amazon News” Twitter account defended its working conditions. “You don’t really believe the peeing in bottles thing, do you? If that were true, nobody would work for us,” it tweeted.

Reporters quickly proved “the peeing in bottles thing” is real and that Amazon is well aware this happens, and will fire drivers who are caught peeing in public.

In recent days, Motherboard has received an outpouring of emails, texts, calls from incredulous current and former Amazon delivery drivers, a law firm, and the owner of an Amazon delivery company, taking offense to Amazon’s claim that drivers don’t pee in bottles. Motherboard put together the collage of pee bottles, cups, and bags you see above from photos we were sent over the last few days. Motherboard confirmed the employment of each driver who sent us a photo.