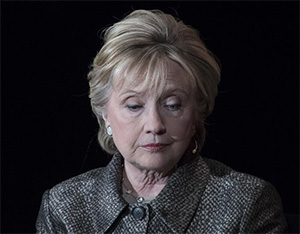 The site didn’t make much sense in the first place. Hillary Clinton crusader Peter Daou advertised Verrit, which the former Democratic nominee endorsed Sunday night, as a “media platform” designed for the 65.8 million Americans who voted for Clinton in November. Verrit is supposed to “collect and contextualize noteworthy quotes, stats, and facts for politically engaged citizens.” In practice, it slaps informational tidbits onto shareable images with seven-digit codes that allow users to … verify that the images come from Verrit.

This isn’t especially useful to anyone. The only thing Verrit is capable of debunking is parodies of Verrit. False statistics from elsewhere don’t come with codes that users can check against the site’s database. Neither, of course, do real ones. Verrit’s collection is finite — filled only with carefully curated cards that confirm Clinton voters’ views. It serves no purpose except to spare those voters the need to confront beliefs that conflict with their own.