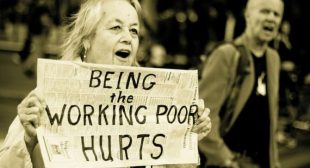 Bolstering arguments that the minimum wage in the United States is a “starvation wage” that must be lifted, a new study by the Government Accountability Office (GAO) found that millions of families with a worker earning the federal minimum or just above it are living in poverty.

Sen. Bernie Sanders (I-Vt.), who commissioned the study, argued that the GAO’s findings amount to overwhelming evidence that $7.25 “is not enough to keep working families out poverty,” and that “Congress must raise the minimum wage to a living wage.”