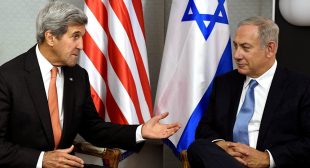 Israel and Egypt lobbied the US to bomb Iran before the 2015 nuclear accord was reached, but Washington saw the proposition as a “trap,” former US Secretary of State John Kerry revealed Tuesday night.

Israeli Prime Minister Benjamin Netanyahu was “genuinely agitating towards action” against the Iranian government, Kerry said Tuesday at an event in Washington, according to published reports.