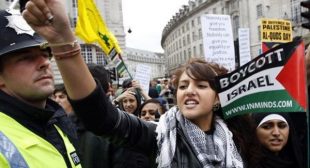 The government will create a blacklist for local individuals and groups known to support the pro-Palestinian boycott movement against Israel.
Israel is ramping up its crackdown on the pro-Palestinian Boycott, Divestment and Sanctions movement as the government plans a blacklist for citizens and companies in Israel that support the movement to then deny them tax breaks and other state benefits, Israeli media reported Thursday.