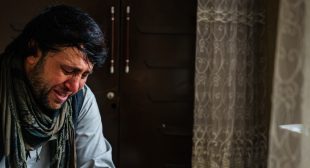 Samim Shahyad, a 25-year-old journalism student, told the New York Times that the U.S. attack killed his father, his two brothers, four of his young cousins, his niece, and his sister’s fiancé. Shahyad added that three of the victims were girls who were just two years old or younger.

“The American aircraft targeted us,” said Shahyad. “I do not know what to say, they just cut my arms and broke my back, I cannot say anything more.”