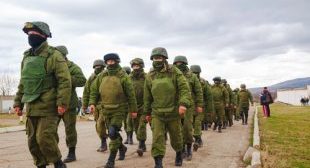 In Ukraine, the West supported an unconstitutional putsch against an elected government perpetrated, among others, by fascist/neo-nazi storm troopers (Svoboda, Right Sector) instrumentalized by U.S. intelligence. After a Russian counterpunch, U.S. President Barack Obama proclaimed that any referendum in Crimea would “violate the Ukrainian constitution and violate international law.”