‘This Is How Fascists Operate’: DeSantis Signs Anti-Voting Bill Behind Closed Doors for Fox News 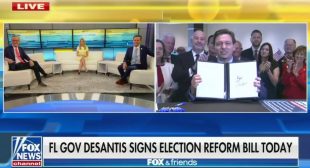 Florida Gov. Ron DeSantis on Thursday barred local media outlets from covering his signing of S.B. 90, the latest state-level voter suppression law which makes voting by mail—which millions of Floridians have done for years—more difficult and discourages voters from waiting in long lines at the polls.

The Republican governor, a close ally of former President Donald Trump, gave Fox News exclusive access to the bill signing, drawing condemnation from rights advocates and at least one local reporter who learned Thursday morning that he would not be able to cover the event.