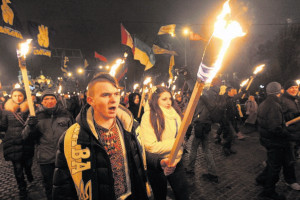 Like the West’s support of sectarian terrorists across the Middle East, including Al Qaeda, it has found the most despicable elements in Ukrainian society to lead “revolution” for the sociopolitical reordering of Eastern Europe. As the dust settles and the West’s proxy regime finds itself safely entrenched in Kiev, Ukraine – the Western media can now finally recuperate some of its lost legitimacy after months of denying the obvious – that armed Neo-Nazis led the so-called “Euromaidan” uprising.

A BBC Newsnight short titled, “Neo-Nazi threat in new Ukraine,” reveals xenophobic Jew-hating nationalists, armed and leading the mobs in Kiev, directly contradicting months of Western media narratives portraying the rabble as aspiring for “freedom,” “democracy,” and “closer ties with the West,” with the most absurd example being the “I am Ukrainian” propaganda reel.