Ukraine: how America’s coup machine has destroyed democracy worldwide since 1953 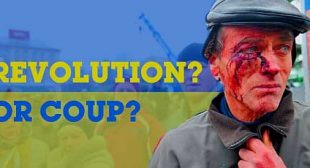 Soon after the 2004 US coup to depose President Jean-Bertrand Aristide of Haiti, I heard Aristide’s lawyer Ira Kurzban speaking in Miami. He began his talk with a riddle: “Why has there never been a coup in Washington D.C.?” The answer: “Because there is no US Embassy in Washington D.C.” This introduction was greeted with wild applause by a mostly Haitian-American audience who understood it only too well.

Ukraine’s former security chief, Aleksandr Yakimenko, has reported that the coup-plotters who overthrew the elected government in Ukraine, “basically lived in the (US) Embassy. They were there every day.” We also know from a leaked Russian intercept that they were in close contact with Ambassador Pyatt and the senior US official in charge of the coup, former Dick Cheney aide Victoria Nuland, officially the US Assistant Secretary of State for European and Eurasian Affairs. And we can assume that many of their days in the Embassy were spent in strategy and training sessions with their individual CIA case officers.