The Strange Logic of the US, EU: East Ukraine’s Referendums Aren’t Democratic But the Coup-Imposed Kiev Regime Is 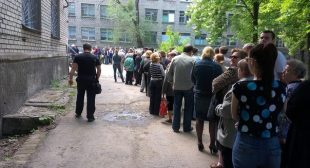 Fraud. Farce. Fake. Undemocratic. No legality. Alternate realities. Zero credibility. Absurd. These are just some of the words used to describe the May 11, 2014 referendums in Eastern Ukraine by the US government and the member states of the European Union. The Russian Federation is being blamed for orchestrating the voting in Eastern Ukraine by the US, European Union, and North Atlantic Treaty Organization in alarmist and Russophobic language too.

The incompetent US Department of State spokeswoman Jennifer Psaki, who was hired because of her history as a Democratic Party campaigner and not because of any understanding of international relations or foreign affairs, described the referenda in the easternmost oblasts of Donetsk and Luhansk (Lugansk) as a replay of Russia’s “Crimea playbook.” She was using the same talking points as her boss, US Secretary of State John Kerry.