Thousands of Israelis Take to the Streets Calling for Palestinian Genocide 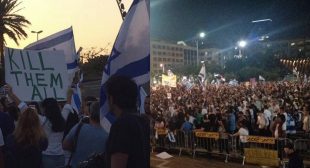 Massive rallies calling for Palestinian genocide have been ignored entirely by social media and the corporate press. Earlier this year in April, a massive anti-Palestinian rally took place in Tel Aviv where thousands called for the death of all Arabs. The rally was organized to support an Israeli soldier who killed an already-wounded Palestinian by shooting him execution-style in the head.