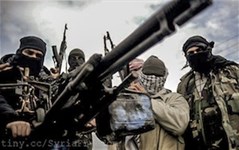 The Islamic State in Syrian and Iraq is officially defeated. The UN resolution which allowed other countries to fight ISIS within Syria and Iraq no longer applies. But the U.S. military, despite the lack of any legal basis, wants to continue its occupation of Syria’s north-east. The attempt to do so will fail. Its Kurdish allies in the area are already moving away from it and now prefer Russian protection. Guerrilla forces to fight the U.S. “presence” are being formed. The U.S. plan is shortsighted and stupid. If the U.S. insists on staying there many of its soldiers will die.

Two days ago the Syrian Arab Army closed the last gaps on the west bank of the Euphrates. Having fought all the way from Aleppo along the river towards the east the Tiger Force reached the liberated Deir Ezzor from the west. All settlements on the way are now controlled by the Syrian government. The remaining Islamic State fighters were pushed into the desert where they will be hunted down and killed.