Suspects in Assassination of Haitian President Had Ties to U.S. Law Enforcement 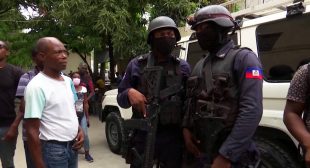 More information is emerging about the suspects involved in the assassination of Haitian President Jovenel Mose last week. At least one of two Haitian Americans arrested was an informant for the U.S. Drug Enforcement Administration, the DEA. Other suspects were also FBI informants. This comes as a U.S. delegation on Monday returned from Haiti after meeting with Haiti’s interim Prime Minister Claude Joseph, as well as Ariel Henry, whom Mose had appointed as Joseph’s successor days before Mose was killed. Dozens of suspects have been arrested, including Colombian mercenaries who were reportedly recruited by a Miami-area security firm called CTU Security, run by a right-wing Venezuelan.