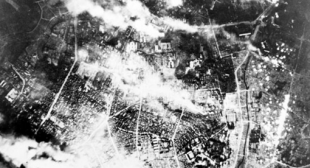 As the world watches with mounting concern the growing tensions and bellicose rhetoric between the United States and North Korea, one of the most remarkable aspects of the situation is the absence of any public acknowledgement of the underlying reason for North Korean fearsâor, as termed by United Nations Ambassador Nikki Hale, a state of paranoia, namely the horrific firebombing campaign waged by the U.S. Air Force during the Korean War and the unprecedented death toll that resulted from that bombing. More