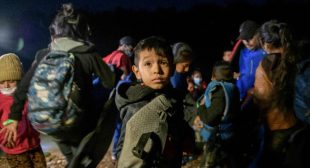 Rep. Alexandria Ocasio-Cortez took to social media Tuesday night with a detailed reminder of the root causes of Central Americans and other migrants seeking asylum at the United States’ southern border.

The New York Democrat is known for engaging with constituents and critics alike on social media. One Instagram user asked the congresswoman: “Why are you not addressing the border crisis and the kids in cages like you used to?” She responded in a series of what are called “stories,” which disappear from the platform after 24 hours—though recordings of her comments are now circulating elsewhere online.

“Are you for real?” Ocasio-Cortez said, visibly frustrated by the claim. “So let’s talk about this because so much of our national conversation, which is not a conversation, about immigration is driven by people who could not care less about immigrants.”