Chomsky: US Leaders’ Panic Over Crimea Is About Fear of Losing Global Dominance 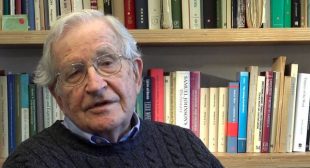 The current Ukraine crisis is serious and threatening, so much so that some commentators even compare it to the Cuban missile crisis of 1962.

Columnist Thanassis Cambanis summarizes the core issue succinctly in The Boston Globe: “[President Vladimir V.] Putin’s annexation of the Crimea is a break in the order that America and its allies have come to rely on since the end of the Cold War—namely, one in which major powers only intervene militarily when they have an international consensus on their side, or failing that, when they’re not crossing a rival power’s red lines.”

This era’s most extreme international crime, the United States-United Kingdom invasion of Iraq, was therefore not a break in world order—because, after failing to gain international support, the aggressors didn’t cross Russian or Chinese red lines.

In contrast, Putin’s takeover of the Crimea and his ambitions in Ukraine cross American red lines.

Therefore “Obama is focused on isolating Putin’s Russia by cutting off its economic and political ties to the outside world, limiting its expansionist ambitions in its own neighborhood and effectively making it a pariah state,” Peter Baker reports in The New York Times.