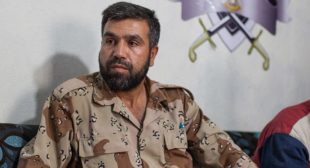 Western-backed rebel leader, Jamal Maarouf, has admitted that the fighting against Al-Qaeda was “not our problem” and that his group is battling alongside the terrorist organization.

Maarouf told The Independent that his group, the Syrian Revolutionary Front (SRF), carries out joint operations with Jabhat Al-Nusra – the official Al-Qaeda branch in Syria.