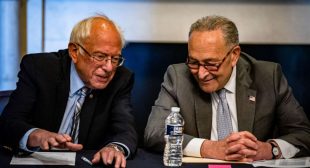 Senate Democrats have unveiled their $3.5 trillion reconciliation bill with provisions like paid leave, expanding Medicare coverage and proposals to tackle the climate crisis in the U.S. The Democrats plan on passing the bill alongside the bipartisan infrastructure package that’s currently being debated in the Senate.

The reconciliation bill, spearheaded largely by Sen. Bernie Sanders (I-Vermont), contains many of the provisions that were carved out of the infrastructure package that President Joe Biden had originally proposed in the spring. That includes traditional infrastructure provisions, such as funding for affordable housing upgrades and transportation.