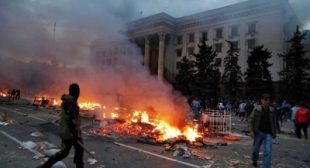 KIEV, May 7 (RIA Novosti) – Last Friday’s massacre in Ukraine’s Odessa that left more than 40 people dead was a well-coordinated and planned operation with the participation of representatives of the authorities in Kiev, Ukraine’s acting Prosecutor General Oleh Makhnitsky said Wednesday.

“This action was not prepared at some internal level, it was a well-planned and coordinated action in which some authorities’ representatives have taken part,” Makhnitsky said.