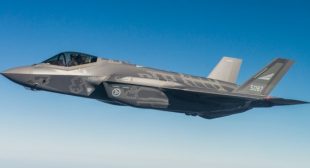 The estimated future cost of the program had previously hovered at a mind-boggling $379 billion, an updated draft that could be submitted to Congress as early as today will reportedly exceed $406 billion—a nearly 7 percent increase.

How ridiculous it is that a weapons program so fraught with failures is allowed to receive such outlandish funding when lawmakers—mostly Republicans, but also many Democrats—continue to argue that the nation is “too broke” to increase spending on social programs that improve education or healthcare.