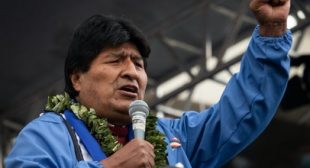 A justice department trial attorney repeatedly contacted Massachusetts Institute of Technology researchers asking, eventually under threat of subpoena, about research they had conducted on the 2019 Bolivian presidential election, according to emails obtained by The Intercept. Sent between October 2020 and January 2021, the emails point to the existence of the Justice Department inquiry and add new evidence to support Bolivian allegations that the United States was implicated in its 2019 coup.

The emails reveal the Justice Department’s involvement in the Bolivian coup regime’s criminal investigation into alleged voter fraud, which has not previously been reported. The inquiry targeted a pair of respected MIT researchers about their work for the Center for Economic and Policy Research, in which they broadly refuted suspicions that Bolivia’s socialist party had rigged the election.