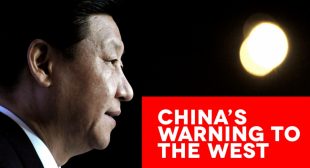 According to Reuters, China’s top envoy to Germany has warned the West against punishing Russia with sanctions for its intervention in Ukraine, saying such measures could lead to a dangerous chain reaction that could spiral out of control. This comes as U.S. Secretary of State John Kerry made a public statement letting Russia know that it has until Monday to reverse course in Ukraine, and the E.U. made it clear in a separate statement that the decision to implement sanctions starting Monday has already been made.