Making History: China and Russia are Transforming Enemies into Friends 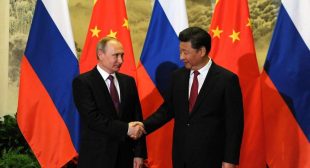 Russia, China and Iran have in recent years drawn enormous benefit from the declining military and economic power of the United States, further propelled by a general mistrust of Washington’s diplomatic and political abilities, both with Obama and now with Trump. The two previous articles showed that Moscow, Beijing and Tehran, even as they addressed different situations, shared similar interests and came to coordinate their military, economic and diplomatic strategy.

The success of the Euro-Asian triptych is based on the essential principle of transforming enemies into neutral players, neutral players into allies, and further improving relations with allied nations. In order for this project to be realized, economic, military and diplomatic efforts are variously employed, depending on the country and the general regional context. The flexibility shown by Moscow and Beijing in negotiations has delivered historic deals, not only in the energy sector but also in the military sphere and also in education and poverty reduction, as seen in Africa.