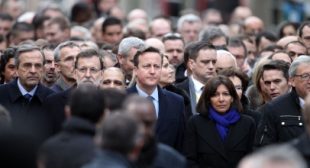 Charlie Hebdo published a characteristically vile cartoon depicting drowning victims of Hurricane Harvey in Houston as being Nazis, with the banner that declared “God Exists”: because, needless to say, white people in Texas love Hitler and it’s thus a form of divine justice if they drown.

That led to a virtually unanimous tidal wave of condemnation of Charlie Hebdo, including from many quarters which, just two years ago, were sanctifying the same magazine for their identical mockery of Muslims. Yesterday’s assault on white sensibilities also led many people to suddenly re-discover the principle that one can simultaneously defend a person’s free speech rights while expressing revulsion for the content of their speech.