Capitalism Is Driving COVID Disaster in the Global South 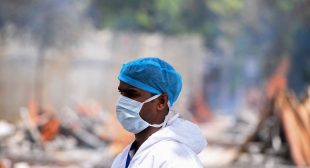 The scenes currently being witnessed in India are truly horrifying. Yesterday, the number of confirmed cases in the country passed 20 million. The country’s health infrastructure is stretched to breaking point. Doctors and nurses report a crippling lack of basic supplies and dramatic overcrowding in ICUs across the country.

With the health system collapsing, the bodies are piling up. Crematoriums are overflowing with bodies, which can’t be burned fast enough to keep pace with the rising number of deaths. Almost everyone in the country has lost someone; many have barely had time to grieve before losing someone else.

Up to now, the rest of the world has looked on with a combination of shock and apathy. It took weeks for countries like the United States and the United Kingdom to offer support: the UK government has recently pledged to send one thousand ventilators to India, on top of a shipment last week that included two hundred ventilators and five hundred oxygen containers. The United States has provided $1.4 billion in emergency aid, along with ventilators, other supplies, and personnel support.