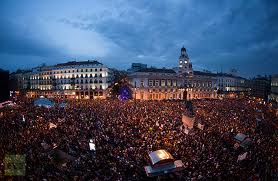 In a nation-wide event which was not surprisingly went unreported by major networks like CNN and Fox, hundreds of thousands took to streets in spain on 12 may to protest austerity.

At least 100,000 protesters angered by the country’s grim economic prospects turned out for street demonstrations in 80 cities across Spain. This marked the one-year anniversary of a mo