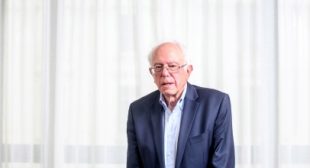 The senator makes clear that “unilateralism, the belief that we can simply overthrow governments that we don’t want, that has got to be re-examined.” After referencing the Iraq War — “one of the great foreign policy blunders in the history of this country” — the senator touches on another historic blunder which, to his credit, few of his fellow senators would be willing to discuss, let alone critique. “In 1953, the United States, with the British, overthrew [Mohammed] Mossadegh, the prime minister of Iran – and this was to benefit British oil interests,” he reminds me. “The result was the shah came into power, who was a very ruthless man, and the result of that was that we had the Iranian Revolution, which takes us to where we are right now.”