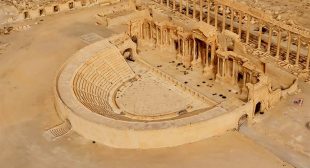 Russian researchers have created a model of the ancient city of Palmyra, based on thousands of drone images. Unveiled at the St. Petersburg cultural forum, it will be given to Syria to help restore and preserve the UNESCO World Heritage site ravaged by ISIS.
The 3D model has been created by scientists from the Institute for the History of Material Culture of the Russian Academy of Sciences, with the help of experts from the Hermitage Museum. As part of their work on the project, which features both landscape and architectural designs of Palmyra, Russian researchers visited the Syrian city in September 2016. During their special expedition, some 20,000 drone images were taken.