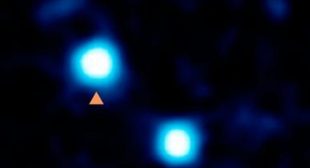 US astronomers announced Friday that they have discovered a star-like celestial body that is thought to be as frigid as the coldest regions on Earth.