Why Impeach Trump at This Late Date? One Word, Says Bernie Sanders: ‘Precedent’ 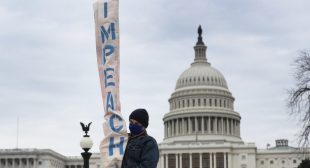 “Some people ask: Why would you impeach and convict a president who has only a few days left in office? The answer: Precedent. It must be made clear that no president, now or in the future, can lead an insurrection against the U.S. government.”

Sanders, who has twice sought the Democratic nomination for president, is on the growing list of members of Congress who have expressed support for impeaching Trump—again—removing him from office, and barring him from holding an elected position in U.S. politics ever again.