What Really Happened When Bernie Sanders Went to Mississippi 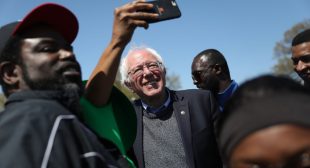 If Beale Street could talk, it would tell a very different story about Bernie Sanders than the now-familiar critique that he is insufficiently sensitive to racial issues. As I walked with Sanders down Memphis’s famous thoroughfare, his popularity, including among the predominantly black crowd attending the commemorative festivities, was self-evident. The senator was stopped every few feet by selfie-seekers and admirers. Yes: Perhaps this is to be expected of any politician with a national profile, but given his poor showing in Mississippi during the 2016 Democratic primary, in which he secured less than 17 percent of the black vote, I had thought the senator and his small cohort might go unnoticed. I was wrong.

A group of 40-something black women were among the first to spot the senator as he exited a parking garage, followed quickly by a black teenager, who endearingly apologized repeatedly to “Mr. Sanders” as he snapped a selfie. Later, at a hotel in Jackson, Mississippi, two black receptionists chatted substantively about the senator after he went upstairs to change for the evening’s event, remarking that Sanders hadn’t forgotten the people who had voted for him — the people he was fighting for. Unlike other politicians, they agreed, “Bernie hasn’t proven himself to be that way yet.”