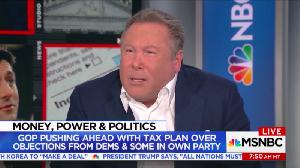 There’ve been a lot of important revelations in the last week, but one of the most significant has gone obscenely under-reported in the shuffle.
In a recent interview with MSNBC’s Stephanie Ruhle, timeshare tycoon and top Democratic party donor Stephen Cloobeck told the world that he was outraged at how Democrats have been treating the one percent, and that he has personally ordered Dem leaders to espouse a platform that is more warm and accommodating to the donor class.