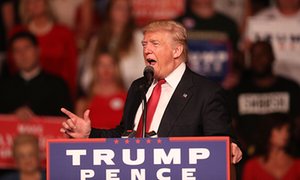 At a forum hosted by NBC on 7 September, Trump suggested oil seizure would have been a way to pay for the Iraq war, saying: “We go in, we spend $3tn, we lose thousands and thousands of lives, and then … what happens is we get nothing. You know, it used to be to the victor belong the spoils.”

He added: “One of the benefits we would have had if we took the oil is Isis would not have been able to take oil and use that oil to fuel themselves.”