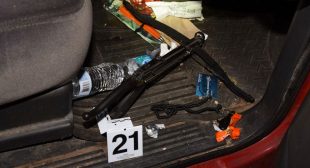 Federal prosecutors submitted chilling new evidence in their case against Capitol siege suspect Lonnie Coffman on Tuesday, including a list the protester had in his possession naming “good guys” and “bad guys,” including the names of a federal judge and a House lawmaker.

Among the evidence submitted to the court are also pictures of the materials seized from Coffman’s truck, which include multiple firearms, a crossbow, stun gun and a cooler with 11 homemade Molotov cocktails. Evidence photos submitted by the Department of Justice show an AR-15-style rifle, shotgun and handgun were taken from the vehicle.

Coffman, who is from Alabama, was arrested Jan. 6 after he returned to his truck in the wake of the protests and was approached by police officers. After being stopped by police in his car, Coffman had “asked officers whether they had located the bombs,” according to an affidavit filed by a Capitol police officer.