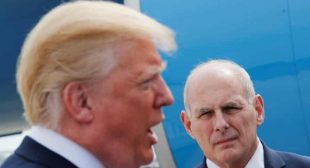 On a visit to Europe to mark the 100th anniversary of the end of the first world war, Donald Trump insisted to his then chief of staff, John Kelly: “Well, Hitler did a lot of good things.”

The remark from the former US president on the 2018 trip, which reportedly “stunned” Kelly, a retired US Marine Corps general, is reported in a new book by Michael Bender of the Wall Street Journal.