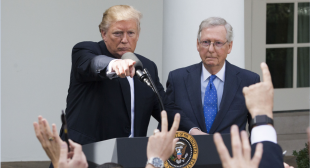 No matter how much a Republican has done for Donald Trump, the former president can easily turn against them if he feels they have let him down in some way — and that includes former Vice President Mike Pence, former U.S. Attorney General William Barr and Senate Minority Leader Mitch McConnell. They all were his targets for an interview featured in Carol Leonnig and Philip Rucker’s new book, “I Alone Can Fix It: Donald J. Trump’s Catastrophic Final Year.”