The Insurrection Was Predictable 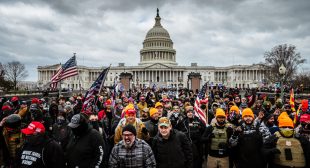 Two months ago, we published a series of reports on the growing threat of a coup attempt, wondering why it wasn’t being taken more seriously by Democrats and the media. We were scoffed at and eye-rolled, as if such things could never happen in America.

Nobody is scoffing or eye-rolling anymore, after Wednesday’s events at the US Capitol. There, insurrectionists stormed the building and halted the certification of the national election, as security forces allowed them to breach the Senate chamber and shut down the proceedings. There was a notable difference in the way federal security forces met last year’s Black Lives Matter protests with a show of force, and the way they allowed the Capitol to be overrun by right-wing authoritarians that they knew were coming.