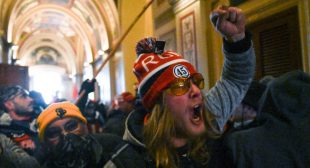 According to a new national survey (pdf) conducted by Vox and Data for Progress, 63% of likely voters—including 81% of Democrats, 67% of Independents, and just 32% of Republicans—believe Trump is either “very much” or “somewhat” to blame for the right-wing invasion of the Capitol Building, which led to the deaths of six people.