The Bewildering Search for the Islamic State in Congo 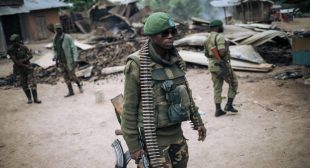 The ‘Kony 2012’ stampede failed, and after the Pentagon had spent more than $780 million on it, President Donald Trump quietly shut it down in 2017. But now the Bridgeway Foundation appears to be luring the Biden administration into another, far more dangerous Central African venture on the basis of evidence that may have been extracted under torture, or at least the threat of it. As the Kony mission was winding down, Laren Poole, one of Invisible Children’s founders and now chief operations officer of Bridgeway Foundation, formed a relationship with officers from Uganda’s security forces who’d been warning for years that a Congo-based rebel group known as the Allied Democratic Forces, or ADF, received weapons and training from radical Islamist groups and was planning to turn a swath of central Africa into a caliphate.