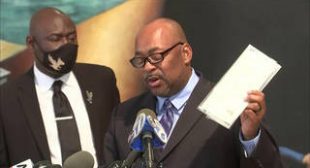 The FBI and New York Police Department are facing renewed calls to open their records into the assassination of Malcolm X, after the release of a deathbed confession of a former undercover NYPD officer who admitted to being part of a conspiracy targeting Malcolm. In the confession, Raymond Wood, who died last year, admitted he entrapped two members of Malcolmâs security team in another crime â a plot to blow up the Statue of Liberty â just days before the assassination. This left the Black civil rights leader vulnerable at the Audubon Ballroom in Harlem, where he was fatally shot on February 21, 1965. Raymond Woodâs cousin Reggie Wood, who released the confession last week at a press conference, tells Democracy Now! his cousinâs involvement in the plot haunted him for much of his life. âRay was told by his handlers not to repeat anything that he had seen or heard, or he would join Malcolm,â says Reggie Wood. âHe trusted me enough to reveal this information and asked me not to say anything until he passed away, but at the same time not to allow him to take it to his grave.â